Stainless Games are back with a brand new IP featuring all the over the top, in your face vehicle combat that you have come to expect from this world class dev studio. ShockRods is a 6v6 or 12 player free-for-all arena shooter, bringing all the blisteringly fast-paced action, mayhem and overpowered weapons you would expect.

ShockRods features 4 stunning, highly varied environments, designed to allow players to exploit their vehicle’s manoeuvrability; with more to come as the game evolves through Early Access. These range from natural looking desert and woodland areas, to man made battle arenas, specifically designed for 6v6 or free-for-all carnage and mayhem.

ShockRods brings 3 classic, tried and tested game modes to the table: Death Match, Team Death Match and Capture The Flag. Plus, enjoy the full combat no-holds-barred Ball Mode - work as a team and protect the ball carrier as they target the opposition goal, or simply reduce your opponents to scrap metal and walk the ball home.

ShockRods allows for full customisation of your hulking war machines. Change your car type, colour, wheels, decals and patterns. Choose from a host of taunt FX and sounds, and much more, to show off your flair and style as you dominate your opponents. All the content is cosmetic and can be unlocked through currency earned in game based on your performance in battle..

ShockRods brings a full arsenal of explosive and somewhat unconventional weapon types to annihilate your opponents. These will be scattered across the environment for you to collect and put to good use. Want a Gatling Gun? Rocket Launcher? Grenade Launcher? We got you covered. Not your style? Try the Balloon Cannon, Freeze Gun or Bulldozer power ups!

Is ShockRods Single Player, Multiplayer or both?

Will there be detailed statistics and rankings?

Can I use a controller to play?

We highly recommend using a Mouse and Keyboard for the most efficient fragging. Controllers will be supported though.

How many cars are there?

There are 6 environments - Arena, Dam, Shockball, Western, Snowfall and Summit.

Are there any differences between the cars?

No - we want everyone to be on an even playing field. The differences are cosmetic - they don’t have unique abilities or statistics, they’re there to give you choices for customisation and personality. They all handle and behave the same.

Does being damaged affect the cars?

Damage to your car is shown as a texture change, giving you a visual idea how close you are to destruction. The handling and behaviour of your car is unchanged, until it explodes!

Is there a Photo Mode?

ShockRods has a fully featured Replay mode which saves your games. You can go back and watch them from any camera angle, in slow motion or pause the action entirely to capture screenshots and video of your (or any other players’) most impressive skills and kills!

Are the cars customisable?

Oh yes! Aside from choosing your favourite car body, you can change the colour, add patterns, change the wheels and their colour, too. But that’s not all! There are custom boosters, vehicle trails, kill effects and taunts!

ShockRods among the titles coming soon on Apple Arcade

Stainless Games is excited to announce that its fast paced action packed "arena shooter with cars" ShockRods will be among the launch titles on Apple Arcade, due to launch soon.

ShockRods featured in Apple’s announcement and video presentation today. ShockRods will be available for iOS, tvOS and Apple Mac devices. Stainless co-founder and ShockRods game director Neil Barnden said, “We are delighted to be part of this new gaming platform launch by Apple. ShockRods has been developed by a dedicated team, whose passion shines through. Apple Arcade gives fans of fast-paced shooters a game they can play across all their devices, on their iPhones and iPads, Apple TV and Macs, plus it will introduce a whole new generation to the arena shooter genre.”

ShockRods will be published by Apple on Apple Arcade and available to download for iOS, tvOS and MacOS. It will also be available on Steam for PC, published by Green Man Gaming Publishing.

Tile: ShockRods 5th environment is here the Western map We are excited to announce the 5th map for ShockRods, this environment has a lot of history as it has recently undergone a huge rework.

Curious? Read about it here: 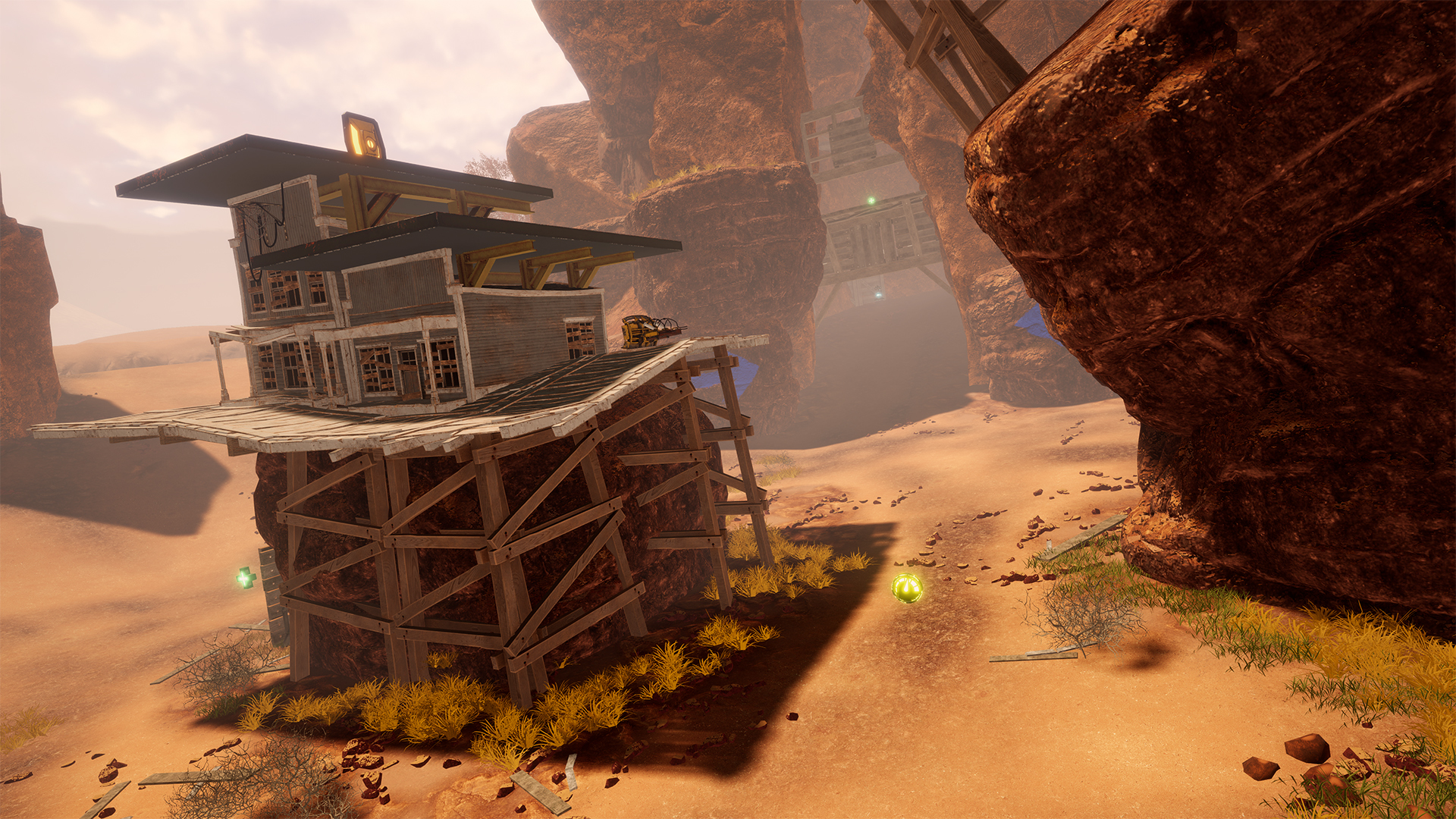 Ever wondered how the stylish and unique vehicles in ShockRods were designed? you can read about the design process and see some very cool concept art here:

What you can expect from ShockRods Q3 release date

Hi there ShockRodders! It’s high time we let you know the latest developments in our plans for ShockRods; its ongoing development and release plans. A lot has been going on, which amounts to far more than just a new lick of paint (although that’s part of it!)…

The BIG news in this update is that ShockRods is now set for full release on Steam, in Q3! That’s right, the game will be coming in fully-fledged final form! And these are the highlights we’d like to share now, some of which coming as a direct result of feedback from our Beta tests:

One of the most requested features from BETA 2.0, there will be a lobby system that allows you to join as a group and enter a match as a group (rather than being randomly assigned to teams). We listened to your wish, and it was granted!

We do not want to give away too much in regards to specifics on this just yet, but we will be adding to the game modes and maps available, giving even more variety to the fun you can have in a ShockRod! Stay tuned to receive further announcements regarding this very soon!

The variety of ShockRod designs is expanding fast, and along with the new vehicles comes the opportunity to customise them with even more patterns, effects and paint styles (see – told you this was one of the things!). So you will be able to truly put your mark on your ShocksRod and let it reflect your own unique sense of style!

This has always been a priority for ShockRods. As far as possible we wanted older and slower hardware to be able to run the game well, and so we’re constantly striving for performance improvements across the board. This work continues, and every week we are making gains that will allow the game to run smoothly on an ever wider range of hardware.

Keep up to date with the latest ShockRods news on Discord https://discordapp.com/invite/shockrods and add ShockRods to your wishlist on Steam! https://store.steampowered.com/app/647640/ShockRods/

We look forward to seeing you in the arena very soon!

Earlier this month we opened up pre-orders for Shock Rods around our live beta testing. Now the beta testing is done and the findings are being acted upon, it’s a good time for us to update you on what’s been happening since.

Firstly, we’d just like to say a big THANK YOU to everyone who not only took part in the test weekends but also dropped by to check out the game at EGX Rezzed in April. We loved chatting to you all and hearing all the great things you had to say about ShockRods.

We had an amazing response from players during the beta, and the hugely helpful feedback and suggestions have continued to come in since – mainly through our dedicated Discord channel. This input has been invaluable to us, allowing us to tune and tweak the gameplay. As part of this process, we’ve made the decision to move the release of ShockRods to late summer 2019. This will allow us to incorporate all the relevant intel that’s been gathered, and address everything that came from the betas and subsequent discussions.

The extra time will ensure that we deliver the very best version of ShockRods possible – which has always been and remains our number one goal.

Once again, thank you everyone for the incredible support! And we look forward to seeing you soon in the ShockRods battle arenas!

We are excited to announce ShockRods BETA 2.0 starting April 25th 18:00 UTC to April 30th 18:00 UTC. To take part in BETA 2.0 you will need to sign up here and we will contact you via Email with what you need to take part in the Beta.

For all those who take part in BETA 2.0 you will be provided with a 50% discount code off the RRP of ShockRods on Green Man Gaming, https://www.greenmangaming.com/games/shockrods-pc/

If you cannot wait until Thursday to get your hands on ShockRods you can check out our exciting BETA 2.0 trailer here